KFC Australia kicks off the cricket season with its brand-new campaign, asking Australians nationwide to join The HCG Buckethead Army

The campaign comprises of TV and online content, PR and social activities, creative outdoor projections and murals and a digital microsite for Australians to join The HCG Buckethead Army and support both Magellan Ashes and later in the cricket season, the KFC Big Bash league.

Shaun Branagan, Group Creative Director Ogilvy Sydney, said: “Who better to take on the Poms and their Barmy Army than our own Green and Gold Camo Buckethead Army? We are sending out a rallying cry across this wide brown land of ours to get people to enlist, and they are… in bucket-loads. That is, until dinner is called.”

Angela Richards, CMO KFC Australia, said: “Over the years, we have seen more and more cricket fans donning a bucket to support the team. We couldn’t believe how this organic movement took off – and we wanted to come back this year bigger and better and make it an official movement.”

“That’s how the idea for The HCG Buckethead Army came to fruition. We want to extend the celebrations outside of the match and really get Bucketheads everywhere. There’s a potential for 24 million Australians to show their support throughout Magellan Ashes, on the street, at work or even in their own ‘home cricket ground’ or HCG.”

The work can be viewed here:
https://www.youtube.com/watch?v=nr9-BfZD6NU&feature=youtu.be

In Australia, we do things differently. Where else in the world does a stranger get called ‘mate’? Where else can you get the day off for a horse race? And where else would you cheer on your country wearing a green and gold camo bucket on your head? Only Australia.

The HCG Buckethead Army celebrates all the unique qualities that make Australia what it is. From the silly Buckethead uniform, to the even sillier ‘hole in my bucket’ anthem, this army isn’t afraid to let loose. It’s about having a good chuckle while gunning for your country. It’s about igniting the spirit of a nation – camo bucket by camo bucket.

And let’s face it, winning isn’t everything, but when it comes to the ashes there is something pretty special about raising the coveted Ashes urn.

The POMs have their Barmy Army so we created The HCG Buckethead Army. A playful and inclusive group of Australian supporters who are never alienating or mean spirited.

It’s passionate, not patronising. Patriotic, not military or war focused. At its heart, it’s a movement that allows Australia to let out its inner ra ra.

Joining The HCG Buckethead Army
The digital build allows every Australian to upload a photo and impose a bucket on their head, before taking part in an interactive game to ‘bang your bucket’. Through the interactive game, a cumulative national score will show the support from Australians everywhere with every bucket banged counting as another cheer of support for the boys.

Throughout the campaign, a tally will show the number of Australian supporters and the cumulative national score will be reflected by live light projections in the hosting city of each test. The higher the score, the bigger and brighter the light projections will become.

On Social
Those enrolled in The HCG Buckethead Army will be tasked with ‘mini-missions’ to create user generated content and spread the word of the campaign through Facebook and Instagram.
In addition, the campaign sees the launch of ‘Gary Bot’ – the interactive Facebook bot. Gary Bot will be giving Facebook Buckethead Army members surprise and delight moments, trivia, jokes and alert people when the ‘bang your bucket’ game is live to win prizes during the cricket games.

PR – The Welcoming Committee
To launch the campaign and set the fun tone and energy, The HCG Buckethead Army welcomed the famous ‘Barmy Army’ – the biggest supporters of the British team – onto Australian soil at Brisbane airport.

In the first ever performance of ‘there’s a hole in my bucket’, the ‘welcoming committee’ poked good old Australian fun at The Barmy Army with a witty take on the old classic lyrics.

In Store
Keep your eyes peeled as many stores across the country have updated their outdoor signage and the Colonel is now sporting a green and gold camo bucket on his head. KFC Team members are also getting involved by dressing up the stores themselves and are signing up in droves to join The HCG Buckethead Army. Green and gold camo buckets will also available to customers in store.

The Ad
With the Ashes Series tied at 32 all we needed is a bigger, louder, sillier army to barrack for Oz and drown out the Poms and their Barmy Army. So, The HCG Buckethead Army was formed.  Our mission? Support Australia. Have fun. Eat chicken. Win the Ashes. Our song? ‘There’s a hole in the bucket’ as it’s a song about a stalemate. 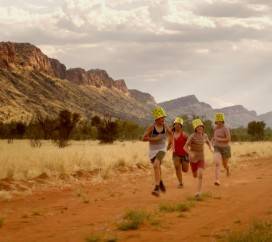