High-impact campaign builds on "If it's flooded, forget it" message

Building on the campaign’s well established ‘If it’s flooded, forget it’ message, this year’s campaign addresses the results of QFES research highlighting that although most Queenslanders agree with the message, some people continue to risk driving though flooded water.

Ogilvy Brisbane ECD, Phil Nobay, said it was important that the creative challenged audience apathy and addressed the message fatigue that a familiar campaign can face.

“We’re talking about saving lives here, so we had a real responsibility to shake drivers out of their comfort zone. Backed by a brave client who’s determined to make real impact on this issue, we’re confronting Queenslanders with the consequence of a bad decision on the people they’d leave behind.

“Using genuine accounts of those who’ve narrowly survived driving through floodwater – everyday mums and dads – we’ve brought to life the impact that not having a plan can have on loved ones,” he said.

The campaign is spearheaded by a content piece that dramatises the real-life experience of a driver who knows the dangers of flooded roads first-hand. Research identified that a core group who continued to test the boundaries and drive through floodwaters are males, living in regional areas who drive 4WDs.

“These guys think their vehicles are bullet proof. To capture the sheer terror of flood water, we pumped almost 5,000 litres of water into a 4WD, as the driver sits behind the wheel, telling a story of when it all went wrong,” Nobay continued.

“This was a massive challenge for director Miles Murphy, as the sheer force of the water could cause issues and we really weren’t sure if the car would hold together long enough for the story to be told. It was a huge achievement to capture the entire piece in a seamless, single take.

“But, of course, we’ll only measure true success on how effectively the message lands on the audience. Don’t get out of your depth. Prepare for your decision to affect others”, added Nobay.

Peter O’Halloran, Communications Executive Manager with Queensland Fire and Emergency Services said: “Every year as Queensland’s storm season starts it is imperative to re-emphasise the message that driving through floodwaters is dangerous.
“This campaign centres around how a driver’s spontaneous decision may affect other people in their life, including mothers, fathers, children, friends and colleagues.  If we can increase community engagement to understand the importance of having a floodwater plan, then it’s one step towards decreasing the number of people who have or might consider driving through flooded roads.”

The recently launched campaign features a broad spectrum of ATL activity including TV, online display, OOH and Social and was.  It will continue to run until the start of May, 2018 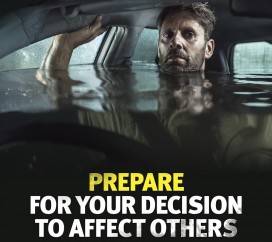