Robots. Are they here to take over the world, or do they possess the transformative power to end global poverty? Whilst in years gone past, SXSW may have been filled with speculation on the future, this year it was evident that the future is here. We’re no longer wondering how AI, cryptocurrency and voice could change the world. Instead we’re assessing their impact and how they have already changed the world, both good and bad.

The festival is truly a smorgasbord for the mind (and the gut too, the tacos here are deadly). I have witnessed some of the most formidable thinkers in the world. From the Mayor of London Sadiq Khan, to the Edison of our day Ray Kurzweil, through to Nonny De La Pena; a pioneer of VR cinema. Over four days I have listened to more than 20 speakers, danced with two robots and almost adopted a mechanical puppy. With two more days to cook this already ‘well-done’ brain, I thought I’d share the three thoughts that have stuck with me:

1.   Conversation is the new interface

Over the last 40 years users have moved from 'clicking' (computers), to 'touching' (mobile interfaces). Now it’s all about 'saying'; conversational interfaces are the new black. Voice assistants are ubiquitous, with 400 million devices featuring Google Assistant already installed on them. Where the mobile interface introduced the idea of ‘sharing’, voice is all about getting things done, and Futurist Amy Webb has predicted that by the year 2021, over half of all interactions will be used by our voices.

This impacts both users and brands profoundly. As a brand are you prepared? This is not one of those uni assignments you can leave to the night before, and hope a strong coffee and a healthy dose of optimism will do the trick. We need to be thinking about the areas where we can help our customers get things done. Plus, we need to think about how our brand sounds. Do we have the sinuous tones of James Earl Jones or are we more Fran Drescher?

For the parents out there who have forgotten what their child’s face looks like, there is hope. With the existence of voice, we are more likely to hear people talking to their device to get things done and less likely to see people buried in the screens of their phone.

The promise of AI is incredibly powerful, but it’s also like a child, and just like rearing a child it needs good parents. If there is one thing SXSW has taught me, it’s that we’re ultimately responsible for our destiny and the destiny of AI (I appreciate that sounded a bit Yoda-ish, but bear with me). AI is constantly learning, but it’s learning from us. It’s learning any bias we may have, it’s learning from the dominant voices that exist in the world, and it’s learning from our habits - the good ones and the bad ones.

So, what happens if the dominant voices don’t represent all of humanity? Minorities get excluded and bias gets reinforced. The best example was given by Megan Smith, the Chief Technology Officer to the Obama Administration. She made the point that for some AI systems, if you were to ask who a surgeon is, the AI response would be ‘a white male’, because that is the status quo. Therefore, engineers and designers have the responsibility to correct the bias. And as humans we have the responsibility to create the world we want AI to learn from. Basically, be a responsible AI parent.

3.   Cognitive estrangement is when tech is its best self

Whilst SXSW has a strong nihilistic undercurrent, one of the more lasting ideas came from Bruce Sterling. Sterling is a Futurist and science fiction novelist. He has a largely dystopian view of the world, but injects a few life lessons along the way.

He offered this idea of cognitive estrangement. He explained it as a sense of wonder, where you are compelled to conceive the world in a different way. It may be something crazy, it could be intriguing, or it could be mind-expanding. It obligates you to suspend disbelief. And the tech world is at its best and most valuable when it does this.

I have been sceptical of the hysteria surrounding Elon Musk, but this conference has made me understand why he is valuable to our world. His interplanetary travel ambitions - in a world of robots - inspires the thought of what humans are truly capable of. And whether it’s a rocket ship to mars, a dancing robot, or even the cutest AI-powered puppy – sometimes we just want to temporarily allow ourselves a moment of disbelief. Just watch this video and you’ll understand how it feels.

So, 4 days in and what have I discovered? Conversation is where it’s at, we need to design for bias in AI, and yes, Elon Musk deserves all the fan ‘people’ he gets. Now excuse me as I track down another breakfast taco. 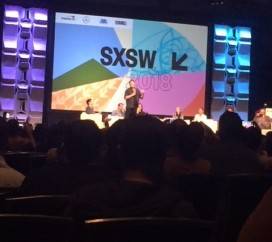